After a month and a few days, we received REACH (Registration, Evaluation, Authorization and Restriction of Chemicals) approved tattoo colors. The current color palette is not as reach as the previous one, like last year's tattoo color palette, but this is just the beginning. Like in the early nineties when we began tattooing. Here you can see that we have a range of colors with which we can tattoo, for example a beautiful Dinamo or Croatian coat of arms. The colors are how the EU authorities demand clean, harmless, permanent, the best, and you can neither die, nor have mutated offspring from them.

I had a heart attack almost a month ago. Unfortunately for those who spread rumors that I died, I am very much ALIVE !!! Alive out of spite. Competition don’t spread the  rumors because I could play dirty too. I'm alive, I continue to tattoo and you are free to order a tattoo from either Stella or me.

Number of photos in gallery: 455

Number of photos in gallery: 141

Number of images in the gallery:: 70

Number of images in the gallery:: 31

Number of images in the gallery:: 29

Number of images in the gallery:: 17

Number of images in the gallery:: 98

Number of images in the gallery:: 34

Number of images in the gallery:: 4

Number of images in the gallery:: 8

Number of images in the gallery:: 16

Number of images in the gallery:: 16

Number of images in the gallery:: 38

Number of images in the gallery:: 32

Number of images in the gallery:: 17

Number of images in the gallery:: 21

Number of images in the gallery:: 25

Number of images in the gallery:: 9

Number of images in the gallery:: 22

Number of images in the gallery:: 109 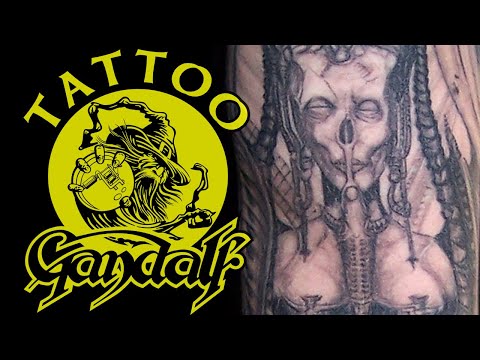 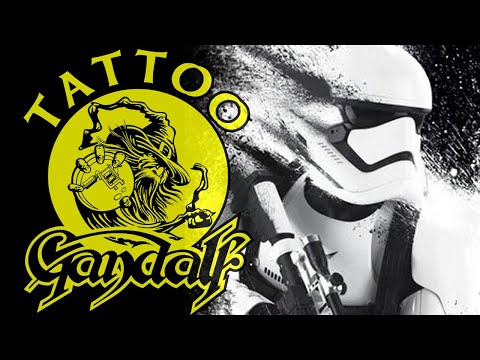 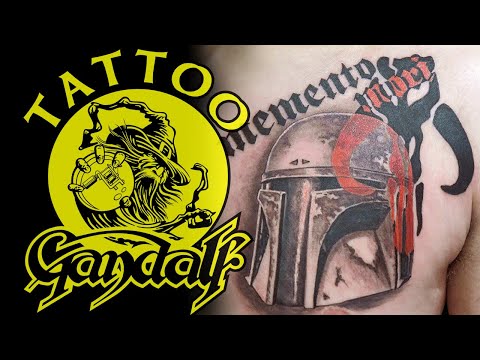 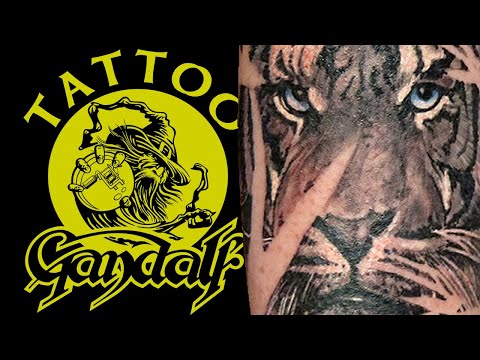 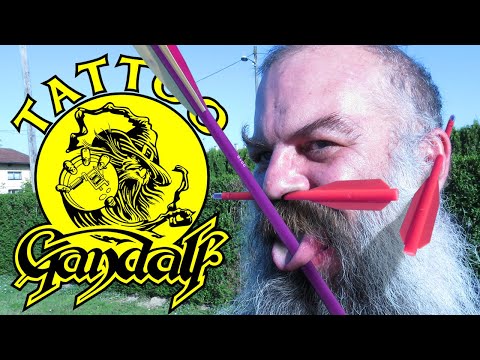 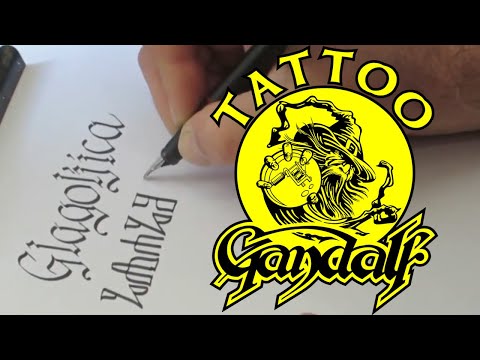 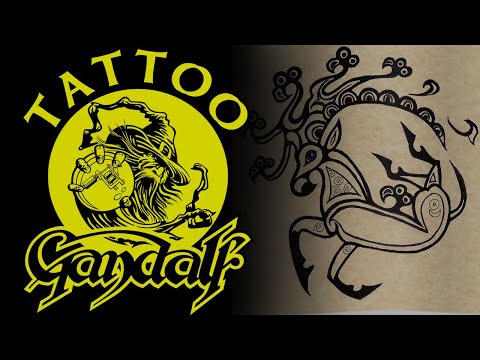 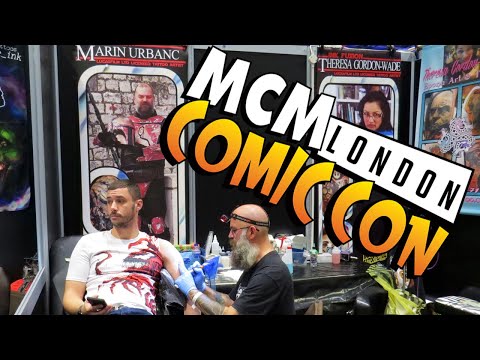 There is no natural born tattoo masters, they need to be created. They are unobtrusive, you recognize them. You will find them there where is ego rejected and substituted with craft man's patience which drain energy from art. Tattooing is demanding job, to get a fed by tattooing, you must feed it for years. If you neglect tattooing for a moment, tattooing will simply leave one who thinks that ruled by it.

GANDALF TATTOO was founded in January of 1998 in Zagreb, Croatia at the address Ribnjak 52. From September of 2004 until December of 2008 the tattoo studio has operated on the premises of Tattoo studio ZAGREB named United Tattoo Studios ZAGREB & GANDALF. From January of 2009, we’re operating as an independent branch of Algiz LLC. owned by Marin Urbanc, who is also the founder and owner of the brand GANDALF TATTOO.Our primary field of work from the very start is tattooing, inspired by themes from JRR Tolkien’s literature and other related subjects, such as the Anglo-Saxon, Celtic and Norse mythology and iconography, but also the wider science-fiction and fantasy world presented through literature, film, painting, music; and the traditional iconography from Croatian history and people of the northern and western Europe. We’ve evolved more as a brand recognized by style, than as an institution, pointing to those that prefer unique design (custom tattoo). We offer them to meet their desires at our tattoo studio with a guidance to get a satisfactory tattoo design. A tattoo, which is designed by their ideas and our imagination. Also, like most other tattoo studios, we offer a large selection of catalogue designs.

The Tattoo business itself demands high hygienic conditions, which GANDALF TATTOO strictly conducts and ensures, to protect our clients and to maintain the trade on the highest possible professional level. Every day we pursue hospital sterilisation and disinfection, and the protection from contamination and cross-contamination of tools and working space. We are also under the regular control of Croatian Institute for Public Health and The Sanitary Inspection. The tattooing tools that we use are selectively chosen, and the tattooing colors that we use are approved by Croatian Institute for Public Health.

Publications in which are published some of our works.

I’ve started tattooing at a considerably young age, when I was 15. At 1986 we were kids from the neighbourhood of Dubrava, Zagreb, who were carried away by punk and metal, and identified themselves with characters from at that time playing bands, who were because of their tattoos, an integral part of their image, marked as outcasts.

It was very important to have a tattoo. Since I had drawing skills, I enlisted for the job. Although, honestly, drawing skill was not of crucial importance to understand a good tattoo. “Slayer” or “Exploited” on someone’s skin could have been done by anyone, just as an “A” inside a circle. Tattoos at that time were very simple, and a reflection of rebellion against the society, not a mere decoration of skin. The tattooing technique we used was far below the level of tattooing in a military service or in a jail. With a needle wrapped with sewing thread, and black ink bought in a nearby bookstore was implemented under the skin; the whole procedure lasted a very long time and was extremely painful, and the results were- from an aesthetical point of view - just OK, at best.. But those were the beginnings of the beginnings, nothing comparable with the tattooing produced in, for our conditions, very advanced Germany, or even America.

In the beggining of 1992. the first legal Croatian tattoo studio has been opened in Zagreb - Roby’s tattoo shop. I thought that in those circumstances I have nothing more to look for in the tattoo world, and I almost gave up the whole idea. But, Roby accidentally saw some of my “works”, and decided to offer me a job. It was the best thing that happened to me until then, and I felt as a kid who has been dreaming about being a pilot, and then, suddenly, the Air Force decides to recruit him. It was the beginning of my professional career.

I worked at Roby’s for a few years. When I quit, I applied for and add I found in a Tattoo paper. A tattooist from Frankfurt- Alf Diamond- was looking for a tattooist. I sent him my work in a letter, and he was very pleased with them. I remember that he told me that I have great potential to become a good tattoo artist, but that my tattooing demands training.

I went to Frankfurt in 1996. and I started my apprenticeship at FTA ALF DIAMOND’S TATTOO STUDIOS. Only then I understood what tattooing actually is, and by seeing what goes into it and how it is done, I realized that the stories about “self-taught” craftsmen doesn’t stand on solid ground. I realised that the truth was brutally simple - the one that doesn’t know anything, can’t be self-thought. After just a couple of months in Frankfurt I gained so much knowledge and skills, I couldn’t gain in Zagreb within a lifetime.

Two years later, in 1998. at Ribnjak in Zagreb, Croatia I opened my own Tattoo Studio Gandalf, and started to work on my own. Two years later, I hired Stela, and I taught her the job that we’re doing together to this day. I want to thank all of my friends, tattooists, illustrators, bands and others who inspired me during the years, and still inspire me to become a better tattoo artist. My special thanks goes to Miroslav Tomas (Tomas Tattoo, Erlangen) for his unconditional help and boundless support during all those years, the man who had the biggest influence on everything I do.

My creative path began in my childhood, while my drawing kit and the smell of fresh paper were the greatest thrill for me.

In 1999. I finished The Faculty of Textile Technology as a fashion designer. In 2000 I got a job at Tattoo Studio Gandalf, where my dearest mentor taught me how to hold a broom, to wash glasses, to communicate with people, how to protect our customers and myself from infectious diseases, how to make a good design, and of course, how to make a great tattoo. All of it happened at the old tattoo studio at Ribnjak in Zagreb, Croatia, where I spent four years. Accidentally, we ended up as a United tattoo studios ZAGREB and GANDALF, when we were united with another tattoo studio. I continued to clean, sterilize, draw, tattoo, talk to customers, and learn more from my dear mentor.

It is difficult to speak about my specialities, but my favourites, and most tattooed in the last years were fairies, flowers, fantasy, ornaments, everything that is “cute”, traditionals (black and white, and in colour), and portraits. I did many things in life; needlework, crochet, sewing, airbrush, I’ve also designed my own clothes and made jewellery. Lately I’m spending my time mostly drawing my own tattoo designs, but my views are wide open because I love all kinds of creative work.

From recently an irreplaceable member of our team. The true is that has the artificial intelligence of the level of the average cockroach, but it does its job of cleaning the tattoo parlor, concretely vacuuming, flawlessly and does not think about anything else while working except when is hungry eat a little bit electricity. Never underestimate a droid.

It is very similar to Roomba but a little bit smarter. It have the artificial intelligence of the level of the average centipede, but it does its job of cleaning tattoo parlor, specifically washing and polishing, flawlessly same like Romba and does not think about anything else while working except when is hungry eat a little bit electricity and sometimes asks for a little water mixed with disinfectant. Never underestimate a droid.

Map network of Zagreb municipal transit system with a designated location of the tattoo studio. For more details, click on the image below.

From 25th to 27th October 2019. as part of Ink Fusion Empire crew we was participate on London's Comic Con.

From 15th to 17th July 2016. was held the third European Star Wars Celebration in London where we attended as Mos Croatia Spaceport and participated as Gandalf Tattoo. At the event was around 50,000 visitors from all over Europe and wider. Impressive, most impressive.

With "The Force Awakens" croatian Star Wars fandom is awakened. In period of last six months we was more active then in last 39 years of Star Wars. Beginning of May was marked by international Star Wars day "May The 4th". We was contibutors of SferaKon 2016. where Star Wars fandom have shown serious level of cosplay, we had a Geek Tattoo Contest and with this get closer tattooing and pop culture in Croatia. Also we hosted Shane Turgeon and he had a lectures about tattooing in Star Wars fandom and geek collectibles.

In July 2015 Marin was participated in the tattoo convention in Cardiff (Cardiff Tattoo and Toy Con) and visited the Secret Cinema in London - The Empire Strikes Back. Impressions from traveling in the UK you can see here.

In September of 2014. Marin has a guest spot in the Canadian tattoo studio Shades of Grey in Edmonton and participated in Saskatoon EXPO and Edmonton EXPO, comic cons within which was tattooing. Similar to last year's Star Wars Celebration Europe II. A brief retrospective of the trip can be seen here.

We was participated on the sixth Star Wars celebration, second european, in Germany in part of which has been maintained a smaller thematically connected tattoo convention at which Marin was tattooing. How was on a celebration you can see on the page with photos and videos.
May the force be with you!

How about everything and about tattooing there are myths and facts. The most common myths we've touched on in the section of frequently asked questions that we argued with the facts. Before you decide on tattooing necessarily pass that section.